"You do Dad's songs with such obvious LOVE and RESPECT. You are not a mere impersonator, you actually HONOR my father and his music!"
---Deana Martin (Dean's daughter and an amazing performer)

"You're the best I've EVER seen, pallie! And I met the real rat pack back in the day! AND...you're so damn funny"
---Frank A, owner of Frank & Dean's in Pasadena

"I've been booking top-tier entertainers for over 40 years at my various nightclubs, some of the biggest names in the business, and Steve Waddington is one of the absolute BEST I've ever seen! Incredible talent!"
-Tom Monteleone, owner of Barone's

Steve Waddington is one of the foremost Dean Martin Tribute Artists in the industry. All the mannerisms, the voice, the charm, the silly playfulness and the incredible warmth combine to make him one of the top  professionals in his field. He's perfected his craft and earned his reputation through hundreds of solo performances as well as co-starring in various "Rat Pack" and "Martin & Lewis" tribute groups. And he has the voice! But what really sets him apart from the rest is his effortless comedic timing and his ability to portray the actual "essence" of the King of Cool. That, and he actually sings the Italian verses!
Close your eyes, and you'll almost swear it was Dino singing all his hits. Open your eyes, and you won't believe how much fun you'll have watching this entertainer create the illusion of one of our most beloved entertainment icons. And just wait til you hear him sing in Italian!   Now THAT'S Amore!

Partial song list includes:
That's Amore
Volare
Everybody Loves Somebody Sometime
You're Nobody Til Somebody Loves You
Innamorata
I Will
In The Chapel In The Moonlight
Send Me The Pillow That You Dream On
Somewhere There's A Someone For Everyone
Just Bummin' Around
Houston
Nobody's Baby Again
Mambo Italiano
Sway
Return To Me
Arreviderci Roma
Little Ol' Winedrinker Me
Things
Remember Me I'm The One Who Loves You
...and too many more to list! 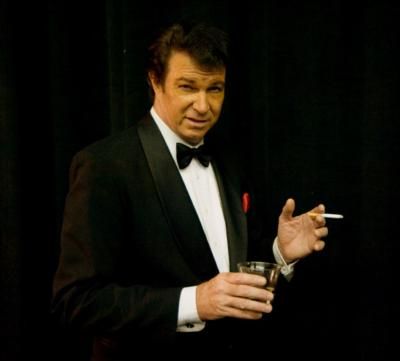 Sometimes, due to venue size, or budgetary concerns, a client wants a show that covers the Rat Pack era, but with just one singer and done to tracks....no problem! Steve is more than able to cover them all! Check it out: